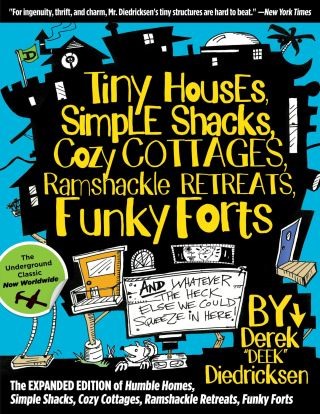 And Whatever the Heck Else We Could Squeeze in Here

Derek "Deek" Diedricksen has been fascinated with compact living ever since his father gave him the book Tiny Tiny Houses by Lester Walker for his tenth birthday. Combining his artistic abilities, wild imagination, and passion for small houses, Deek self-published Humble Homes, Simple Shacks, Cozy Cottages, Ramshackle Retreats, Funky Forts, and Whatever the Heck Else we could Squeeze in Here in 2009. This new and expanded edition is a collection of Deek’s creative/imaginative sketches for building small houses, shacks, cottages, and forts.

Deek's one-of-a-kind sketches are accompanied with hand-written commentary, both instructive and comical. His main purpose is to encourage people to get off the couch and start building. Believing that specific building plans squash creativity, he avoids too many detailed instructions, so that do-it-yourselfers can put their own creative spin on their very own small abodes (even if it is just in their imaginations).

Derek Diedricksen: Derek "Deek" Dierdricksen has been a voice for the small house movement for several years. He has led workshops for Tumbleweed Houses and is the author/artist/designer of Humble Homes, Simple Shacks, Cozy Cottages, Ramshackle Retreats, Funky Forts (the original edition of this book), as well as Micro Shelters and Micro Living. He and his work have been featured in the New York Times, and on PBS, NPR, ABC, and more. He lives with his wife and children in Stoughton, Massachusetts. Want more Deek? Find him at http://relaxshacks.blogspot.com/