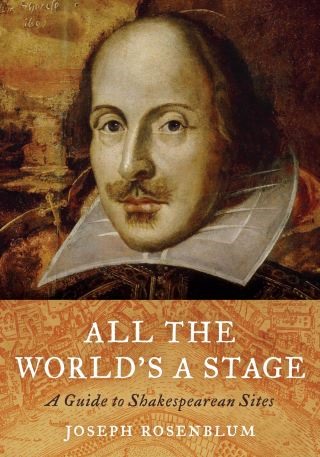 All the World's a Stage

A Guide to Shakespearean Sites

William Shakespeare wrote during a great age of exploration, of not only England but around the globe. The locales featured in the playwright’s works are crucial to the drama that unfolds in each of his plays. Though England figures in many of his works, his vision encompassed countries all over Europe—from Shylock’s house in The Merchant of Venice to Kronberg castle in Hamlet.

In All the World’s a Stage: A Guide to Shakespearean Sites, Joseph Rosenblum identifies and describes all of the settings featured in the bard’s plays—from modest dwellings noted in a brief scene to the wide array of castles depicted in many of his histories and tragedies. Locations that figure significantly in Shakespeare’s plays include Austria in Measure for Measure, Cypress in Othello, Illyria in Twelfth Night, Egypt in Antony and Cleopatra, and Flroence in All’s Well That End’s Well, among others. Historic buildings are also scrutinized, from the Tower of London in several plays to Notre Dame in Henry VI and the Forum in Julius Caesar. In addition to plot summaries, the author analyzes the choice of locations, delineating the historically prominent settings of Shakespeare’s epic dramas, such as the glorified Rome and the sensual Egypt that Marc Antony is torn between in his pursuit of Cleopatra. Rosenblum also discusses how some of Shakespeare’s settings were either altered or invented for dramatic purposes, such as the imagined sea coast of Bohemia in A Winter’s Tale and Prospero’s island in The Tempest.

Though focused on plays, this volume also discusses locations associated with Shakespeare that do not appear in his works. In addition to descriptions of very real settings throughout Great Britain, the author notes underground stops in London ideal for tourist exploration. Indeed, anyone interested in a Shakespearean tour of England will find material here for designing such a trip. Meticulously researched and featuring an appendix of works by location, All the World’s a Stage: A Guide to Shakespearean Sites is an invaluable resource for scholars, students, and fans of England’s greatest playwright.

Joseph Rosenblum: Joseph Rosenblum is professor of English at University of North Carolina at Greensboro. He is the author or editor of several books, including Chaucer Illustrated: The Canterbury Tales in Pictures over 500 Years (2003) and The Definitive Companion to Shakespeare (2017).