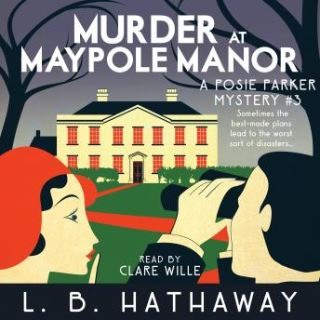 Posie has been asked to accompany Inspector Richard Lovelace of Scotland Yard on an undercover mission. Their destination is a glittering New Year’s Eve party at Maypole Manor, the clifftop home of Lord Robin Glaysayer. Among the twelve guests are a famous film star, an artist, an Italian nobleman, a government spy and a clairvoyant.

With a blizzard raging outside, when a killer strikes, the Inspector and Posie’s skills are tested to breaking point as they try to find the murderer before he attacks again.

But danger lurks at every corner: just who exactly is the mysterious thirteenth house guest? Why is Posie being singled out for special attention?

And will she ever see Alaric Boynton-Dale ever again?

This is a classic Golden Age of Crime murder mystery which will appeal to fans of Agatha Christie and Downton Abbey. 'Murder at Maypole Manor' is the third book in the delightfully classic Posie Parker Mystery Series, although the novel can be enjoyed as a stand-alone story in its own right.

If you love an action-packed historical cozy crime with a feisty protagonist, download the audiobook sample or buy 'Murder at Maypole Manor' now.

˃˃˃ Other books by L.B. Hathaway available as Audiobooks:

'The Tomb of the Honey Bee' (A Posie Parker Mystery #2)

'The Vanishing of Dr Winter' (A Posie Parker Mystery #4)

To be the first to hear about L.B. Hathaway's new releases sign up for the newsletter on lbhathaway.com