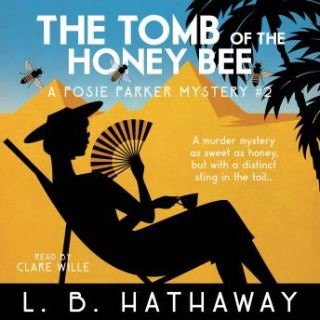 The Tomb of the Honey Bee

Like your mysteries as sweet as honey but with a real sting in the tail?

Posie Parker thought she was about to enjoy a restful summer. But this is no ordinary summer holiday...

When famous explorer Alaric Boynton-Dale disappears, Posie uncovers many dark secrets: an aristocratic family torn apart by hatred, a bizarre murder at an English country house, and a cryptic clue left behind by Alaric which is sweet as honey, but deadlier than poison.

In an action-packed case where simply everyone has a motive for wanting Alaric dead, Posie’s investigation starts off in the English Cotswolds, takes her through the glamorous South of France, on to the mysterious island of Ortigia in Italy, and then into the Tombs of the Pharaohs in Egypt.

But is she being followed by a cold-blooded killer? And where has Len, her almost-boyfriend, disappeared to?

This is a classic Golden Age of Crime murder mystery which will appeal to fans of Agatha Christie and Downton Abbey. The Tomb of the Honey Bee is the second book in the delightfully classic English Posie Parker Mystery Series, although the novel can be enjoyed as a stand-alone story in its own right.

If you love an action-packed historical cozy crime with a feisty protagonist, download the audiobook sample or buy 'The Tomb of the Honey Bee' now.

˃˃˃ Other books by L.B. Hathaway available as Audiobooks:

'The Vanishing of Dr Winter' (A Posie Parker Mystery #4)

To be the first to hear about L.B. Hathaway's new releases sign up for the newsletter on lbhathaway.com