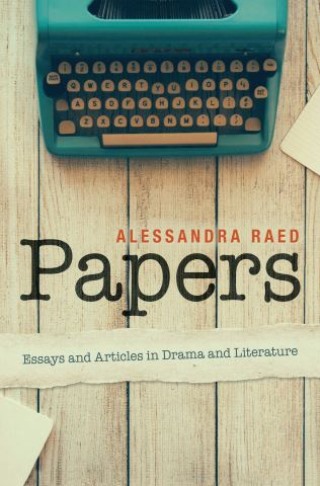 Essays and Articles in Drama and Literature

Papers is a compilation of essays and articles in Drama and English literature. It reflects the author’s experiences, views, and studies in the areas of drama (theatre, production and performance), and writing (journalism and creative writing). The works from other authors cited and/or mentioned in this book are referenced.

Alessandra Raed: Alessandra Raed is a Brazilian journalist, creative writer, actress, director and drama teacher. She lives in Australia with her daughter Isabella who was the inspiration for Alessandra’s first published kids book Naughty Nana in 2016 (1st ed). She has published its sequel Naughty Nana and the old House around the corner in 2019 (1st ed), and a third book Noise – a collections of short stories and poems set in Rio de Janeiro also in 2019 (1st ed). Papers: Essays and Articles in Drama and Literature is Alessandra’s fourth published book. Back in Brazil, in early 2000, Alessandra completed Degrees in Journalism and Theatre Studies. In 2017, Alessandra completed Associate Degree of Creative Writing via Southern Cross University, Australia. She is on her way to completing Bachelor of Arts/Bachelor of Education in 2021 with majors in Drama and English. Alessandra is the founder and director of Starlettes Dance Theatre Australia that offers drama classes, rehearsals, and stage productions in the Far North area of New South Wales. In creative writing, Alessandra won third prize in 2016 Fusion Poetry Competition at Australia Southern Cross University with her poem ‘Hummus and Herbs’ about family of immigrants, and won second prize with the same poem at Wilda Morris Poetry Challenge 2017. Her creative writing works have appeared on the American literary magazines, Anti-Heroin Chic, The Borfski Press, Basil O’Flaherty, Academy of the Heart and Mind, Tiny Spoon, Event Horizon and Comstock Review. In India, she has poems published on the OPA Anthology of Contemporary Women’s Poetry. In Australia, her works have appeared on Northerly Magazine. Some of her published works found online are under her previous married name Salisbury.