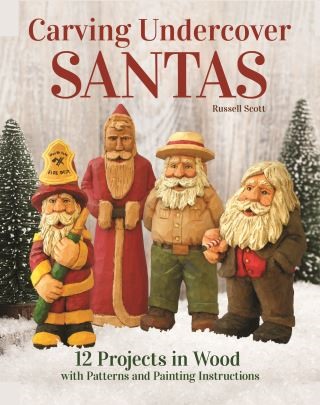 12 Projects in Wood with Patterns and Painting Instructions

·         Includes 7 step-by-step projects with patterns and instructions to carve and paint each piece, plus a gallery of 6 additional designs

Russell Scott signed up for his first wood carving class in 1999 through community education and loved it from the start.  His first teacher assigned six carving projects in the eight week class using hand tools only and a wide selection of woods (basswood, catalpa, red cedar, butternut, aspen and pine). The final class project was a Santa Claus figure.  Russ thought his first Santa carving was a masterpiece.

Since that time he has taken many carvings classes from a wide range of instructors (locally and nationally), studied books, videos and carving magazines.  He has carved and consulted with other woodcarvers through the years from whom he learned many techniques and methods for carving, painting and finishing. He has developed his own style of carving and specializes in carving human figures, especially Santa Claus.

Each carving is done entirely by hand, carved free form from a model that Russ has developed using computer software and drawings. After carving each character, it is painted to enhance the image.  He carves mostly in basswood and cottonwood bark. His carvings have received awards at carving shows, county and state fairs, and national carving contests. He is a member of several professional carving organizations.  He also teaches woodcarving classes and has written several instructional wood carving books and created videos which can be viewed on YouTube.