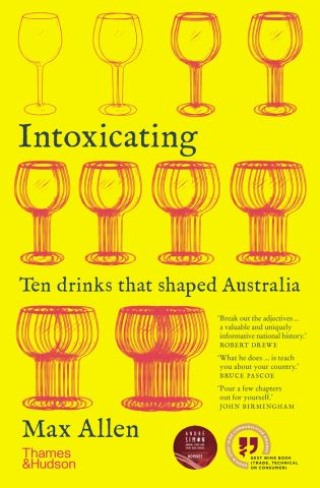 The fiery burn of rebellion rum, a thirst-quenching gulp of ice-cold beer, the medicinal tang of restorative bitters... What did the drinks that shaped Australia first taste like? In search of answers, award-winning writer Max Allen takes us on a personal journey through Australia's colourful and complex drinking history, glass in hand. We taste the fermented sap of the Tasmanian cider gum, enjoyed by Indigenous people long before European invasion, sip 'claret' and 'sherry' in the cool stone cellars of the country's oldest wineries, sample 150-year-old champagne rescued from a shipwreck and help brew an iconic 1960s Australian lager. Allen also shares recipes for historic cocktails to try at home (Blow My Skull, anyone?), introduces many of the characters from Australia's boozy history and offers a glimpse of how our drinking culture might evolve in the future. Whatever your pleasure, Intoxicating illuminates the undeniable place alcohol has in Australia's history.

Max Allen: Max Allen is an award-winning journalist and an honorary fellow of the University of Melbourne. He has been writing about wine and drinks for more than twenty-five years and is currently columnist for the Australian Financial Review, Australian correspondent for jancisrobinson.com and a long-time contributor to Gourmet Traveller Magazine. In 2011, Allen's book The Future Makers: Australian Wines for the 21st Century was named Best International Wine Book at the Louis Roederer Wine Writers Awards. In 2013, he was awarded a State Library of Victoria Creative Fellowship to research the relationship between early Victorian winegrowers and Aboriginal communities. And in 2018, he was named Australian Wine Communicator of the Year.