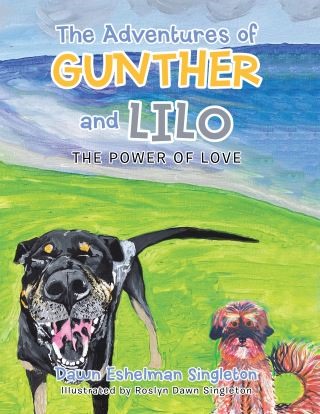 The Adventures of Gunther and Lilo

The Power of Love

Gunther is just a puppy when a kind family adopts him in Hawaii. He wants to grow into a strong watchdog, but instead, he feels frightened and withdrawn. Sometimes, he even hides under the house! Gunther is lonely and longs for a dog friend. That’s when Lilo the poodle appears. With Lilo’s help, Gunther becomes stronger. Because of their friendship, he no longer feels afraid or alone—as long as he has Lilo. In Gunther’s second adventure, after losing Lilo in an enormous hole and sitting very sadly at his gate, he meets a coqui frog named Sally. Concerned for her new friend, Sally lets Gunther grieve and tell his story. Sally and the other coqui frogs come together and, with the help of an owl named Lily, use the power of love and friendship, save Lilo. Like these playful pups, humans need each other. Being connected through relationship brings out our own strengths and uniqueness. With Gunther and Lilo’s help, small children will learn the importance of connection and of being a loyal friend.

Dawn Eshelman Singleton: Dawn Eshelman Singleton received her master’s, doctorate, and Ph.D. in natural medicine at International Quantum University for Integrative Medicine. Her love of nature and animals is the foundation of her children’s books. She is also the author of The Three Amigos and Their Friends A touch of Heart. Roslyn Dawn Singleton attended the University of Pittsburgh. Pittsburgh was one of the six full scholarships offered to her during her gymnastics career. Roslyn’s outstanding academic achievement and her exceptional performance as an elite gymnast drew the interest of many elite universities. Roslyn loved and studied art during her stay at the University of Pittsburgh.