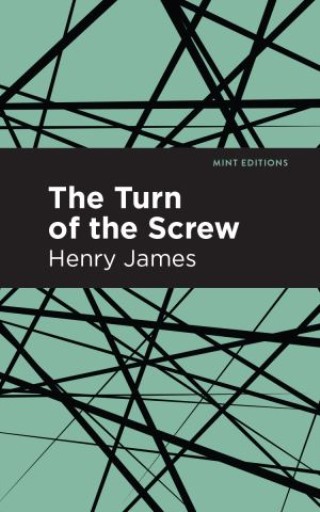 The Turn of the Screw

"[James] is the most intelligent man of his generation." -T. S. Eliot

"The economy of horror is carried to its last degree."-Edith Wharton

Henry James’ The Turn of the Screw (1898) is one of the most gripping psychological novellas ever written; a grim tale that could equally be a tale of madness or a tale of the supernatural. The depths and meaning of this story has been one of the most fascinating literary debates in all of literature. The intriguing asymmetry of The Turn of the Screw, between the seen vs. unseen, the internal v. the external, and good vs. evil, rises this book beyond what can be described as a simple ghost story.

The novella begins on Christmas Eve with the recitation of a letter. The story quickly shifts to the perspective of a governess, who is the subject of the strangely ambiguous story. She had been employed by a dashing bachelor to take care of his niece and nephew in a remote country home. To her surprise, she is requested not to reach the uncle of the children under any circumstance. She is smitten by Flora, the little girl, but receives a letter that the boy, Miles, has been expelled from his school and would not be able to return. One evening, strolling outside, the governess is shocked to see a man in the tower of the house, and later in a window. When she describes him to Mrs. Grouse, the maid, she is informed that the description matches that of a former valet, who had died. Later, while at the lake with Flora, the governess sees a second apparition, that of the governess who proceeded her. As the ghosts eventually occupy the house, the governess develops a fearful obsession of the corruption of the children by the terrifying spirits. This gripping work of the unknown and moral decline is one of the most haunting pieces of fiction in the western canon.

With an eye-catching new cover, and professionally typeset manuscript, this edition of The Turn of the Screw is both modern and readable.

Henry James (1843-1916) was an American author of novels, short stories, plays, and non-fiction. He spent most of his life in Europe, and much of his work regards the interactions and complexities between American and European characters. Among his works in this vein are The Portrait of a Lady (1881), The Bostonians (1886), and The Ambassadors (1903). Through his influence, James ushered in the era of American realism in literature. In his lifetime he wrote 12 plays, 112 short stories, 20 novels, and many travel and critical works. He was nominated three times for the Noble Prize in Literature.