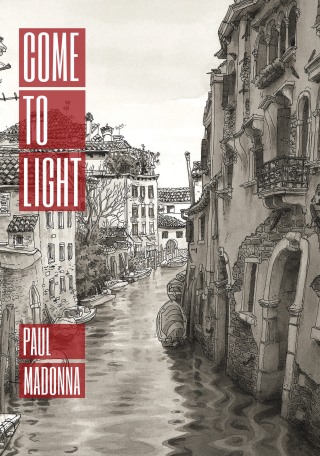 From award-winning artist and author Paul Madonna comes an electrifying mystery novel full of unexpected plot twists, lively characters, and over one hundred lush drawings. Presented in an innovative three-volume boxed set, Come to Light is a gripping page-turner that weaves an intoxicating tale of love, murder, books and art.

Come to Light is a fresh and original mystery with an unusual detective: Emit Hopper, a former rock star turned author and artist. Six years ago, Emit’s wife, Julia, went missing. Now the remains of her two hiking companions have been found buried in the California wilderness. But the discovery raises more questions than answers, so with his love for classic detective books and rye whiskey, Emit sets out across Europe chasing down clues, sketchbook in hand.

Quickly, Emit finds himself embroiled in a plot far larger than he could have imagined: he becomes a target of a State Department investigation, gets entangled in an international ring of art thefts, and discovers his own artwork stolen. He meets an exuberant French nobleman, a murderous five-year-old, and a bohemian Roman heiress. From the Venice Biennale to the flooding of Piazza Navona, you’ll find yourself laughing, gasping, and drawing right alongside Emit as he travels through some of the most beautiful regions of Europe, unraveling a suspense-filled and surprisingly tangled mystery.

Replete with strikingly rendered drawings that bring this exquisite and intriguing novel to life, Come to Light is the thrilling follow-up to the adventures of Emit Hopper, which debuted in Close Enough for the Angels.

Paul Madonna: Paul Madonna is an award-winning artist and writer whose unique blend of drawing and storytelling has been heralded as an “all new art form.” He is the creator of the series All Over Coffee, which ran in the San Francisco Chronicle for twelve years, and the author of five books, including Everything is its own reward (winner of the 2011 NCBA for best book) and the Emit Hopper Mystery Series. Paul’s work ranges from novels to cartoons to large-scale public murals, and can be found internationally in print as well as in galleries and museums, including the Oakland Museum of California and the William Blake Association in France. Paul was a founding editor for therumpus.net, has taught drawing at the University of San Francisco, and frequently lectures on creative practice. He holds a BFA from Carnegie Mellon University and was the first (ever!) art intern at MAD magazine.