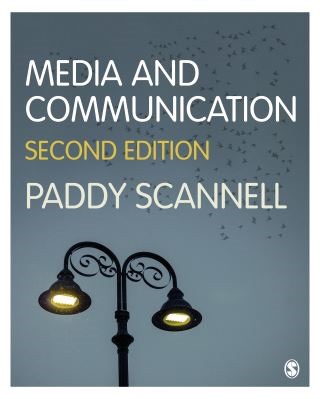 Media and Communication traces the historical development of media and communication studies in the 20th century.

Paddy Scannell explores how the field formed and developed in both North America and in Europe, expertly introducing and explaining a host of essential media thinkers, ideas and concepts along the way.

Paddy Scannell: Paddy Scannell worked for many years at the University of Westminster (London) where he and his colleagues established, in 1975, the first undergraduate degree program in Media Studies in the UK. He is a founding editor of Media, Culture and Society which began publication in 1979 and is now issued six times yearly. He is the author of A Social History of British Broadcasting, 1922-1939 which he wrote with David Cardiff, editor of Broadcast Talk and author of Radio, Television and Modern Life. He is currently working on a trilogy. The first volume, Media and Communication, was published in June 2007. Professor Scannell is now working on the second volume, Television and the Meaning of 'Live.' The third volume, Love and Communication, is in preparation. His research interests include broadcasting history and historiography, the analysis of talk, the phenomenology of communication and culture and communication in Africa.