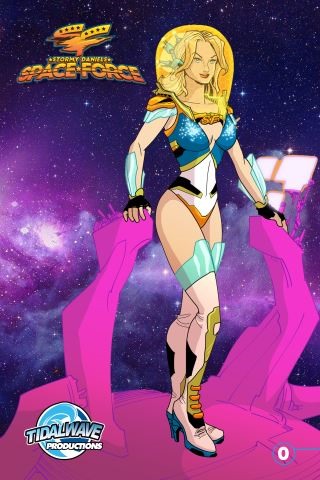 A behind the look scenes look in the sci-fi adventure comic book series "Stormy Daniels: Space Force". Captain Stormy Daniels commands the for-hire U.R.E. Helix, a United Republic of Earth starship. Led by OrDon, a self-proclaimed “very stable genius” and Ruler for Infinity, the U.R.E. seeks to exploit the galaxy’s untapped riches with little regard for who – or what – is out there. On a mission to rescue a scientist responsible for the creation of a devastating weapon capable of destroying the Earth, the U.R.E’s flagship is captured by the maniacal Red Queen. Only Captain Daniels, her second-in-command, Dax, her droids, and the mysterious alien, Munch, can save us! It’s Barbarella meets Star Trek meets Stripperalla in a racy comedy and action and adventure series starring Stormy Daniels.