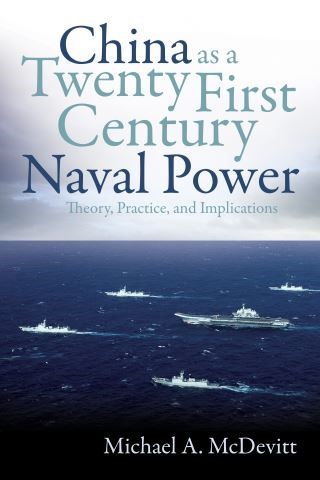 China as a Twenty-First-Century Naval Power

Xi Jinping has made his ambitions for the People’s Liberation Army (PLA) perfectly clear, there is no mystery what he wants, first, that China should become a “great maritime power” and secondly, that the PLA “become a world-class armed force by 2050.” He wants this latter objective to be largely completed by 2035. China as a Twenty-First-Century Naval Power focuses on China’s navy and how it is being transformed to satisfy the “world class” goal. Beginning with an exploration of why China is seeking to become such a major maritime power, author Michael McDevitt first explores the strategic rationale behind Xi’s two objectives. China’s reliance on foreign trade and overseas interests such as China’s Belt and Road strategy. In turn this has created concerns within the senior levels of China’s military about the vulnerability of its overseas interests and maritime life-lines. is a major theme. McDevitt dubs this China’s “sea lane anxiety” and traces how this has required the PLA Navy to evolve from a “near seas”-focused navy to one that has global reach; a “blue water navy.” He details how quickly this transformation has taken place, thanks to a patient step-by-step approach and abundant funding. The more than 10 years of anti-piracy patrols in the far reaches of the Indian Ocean has acted as a learning curve accelerator to “blue water” status. McDevitt then explores the PLA Navy’s role in the South China Sea and the Indian Ocean. He provides a detailed assessment of what the PLAN will be expected to do if Beijing chooses to attack Taiwan potentially triggering combat with America’s “first responders” in East Asia, especially the U.S. Seventh Fleet and U.S. Fifth Air Force. He conducts a close exploration of how the PLA Navy fits into China’s campaign plan aimed at keeping reinforcing U.S. forces at arm’s length (what the Pentagon calls anti-access and area denial [A2/AD]) if war has broken out over Taiwan, or because of attacks on U.S. allies and friends that live in the shadow of China. McDevitt does not know how Xi defines “world class” but the evidence from the past 15 years of building a blue water force has already made the PLA Navy the second largest globally capable navy in the world. This book concludes with a forecast of what Xi’s vision of a “world-class navy” might look like in the next fifteen years when the 2035 deadline is reached.