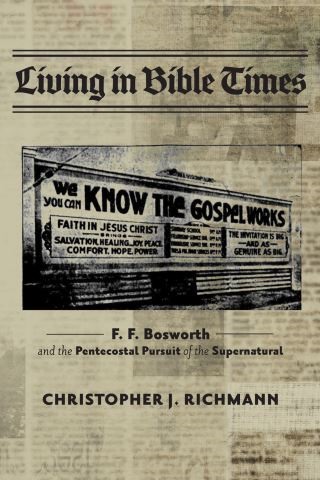 F. F. Bosworth and the Pentecostal Pursuit of the Supernatural

F. F. Bosworth was the only major living link between the late-nineteenth-century divine healing movement that gave birth to Pentecostalism and the post-World-War II healing revival that brought Pentecostalism into American popular culture. At once on the fringes and in the mainstream of American Pentecostalism, Bosworth has largely been ignored by historians. Richmann demonstrates that Bosworth's story not only draws together disparate threads of the Pentecostal story but critiques traditional interpretations of speaking in tongues, Azusa Street, denominational affiliation, divine healing, the relationship to fundamentalism, the Word of Faith movement, and eschatology. In this critique, Richmann provides a much-needed critical biography of Bosworth as well as a fresh interpretation of Pentecostalism.

Christopher J. Richmann: Christopher J. Richmann is affiliate faculty in Religion and Assistant Director for the Academy for Teaching and Learning at Baylor University. His articles have been published in Pneuma, the Journal of the European Pentecostal Association, the Wesleyan Theological Journal, and Lutheran Quarterly.