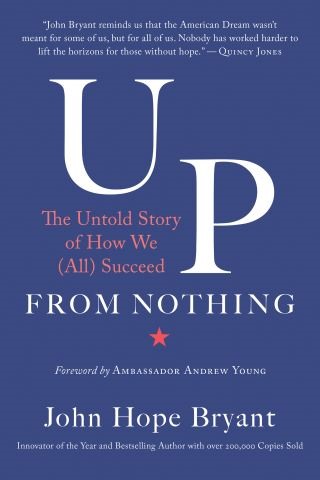 The Untold Story of How We (All) Succeed

American opportunity is not dead. Bestselling author and entrepreneur John Hope Bryant outlines the mindset and practices that will allow us to achieve the American Dream, no matter what our current circumstances are.

Facing a challenging economy, too many Americans despair of improving their lives. But John Hope Bryant insists that America is still the Land of Opportunity. Up from Nothing revives the forgotten story of the American Dream. It's about our beginnings as a nation of go-getters who believed they were winners before they won.

Using the inspiring story of his own rise from humble beginnings, and that of his parents and grandparents, Bryant shows how individually we can change our mindset from survivor to thriver to winner and move beyond just getting by or being financially independent to becoming wildly successful. Collectively, we need to become a nation of winners once again.

By ensuring that every stakeholder in America has access to the Five Pillars of Success—massive education, financial literacy, strong family structure, self-esteem, and supportive role models—Bryant shows how we can fulfill the promise of America's greatness. But to do so, we must turn away from distractions—such as political in-fighting or racial and class divisions—and focus on what we can control. This is not a book of tips on how to get a better job or make more money. It's about adopting a new way of thinking that will do all that for us and more. Up from Nothing is the new (old) business plan to keep us winning as a country.

John Hope Bryant: John Hope Bryant is the founder, chairman, and CEO of Operation HOPE Inc., CEO of Bryant Group Ventures, CEO of Promise Homes Company, and cofounder of Global Dignity. He has been recognized by the last five US presidents and served as an advisor for the last three. Bryant is the recipient of hundreds of awards and citations for his work, including being named as one of the Atlanta Business Chronicle’s Most Admired CEOs for 2018, American Banker’s 2016 Innovator of the Year, Inc.’s the World’s 10 Top CEOs (honorable mention), and Time’s 50 for the Future. He is the author of three bestselling books, The Memo, How the Poor Can Save Capitalism, and Love Leadership.