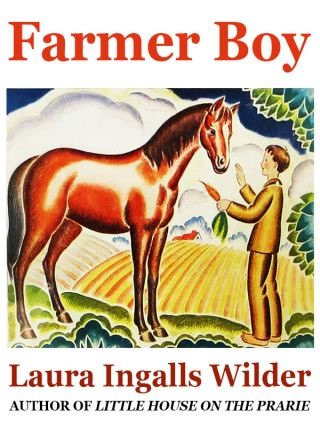 Farmer Boy is based on the childhood of Wilder's husband, Almanzo Wilder, who grew up in the 1860s near the town of Malone, New York. It covers roughly one year of his life, beginning just before his ninth birthday and describes a full year of farming. It describes in detail the endless chores involved in running the Wilder family farm, all without powered vehicles or electricity. Young as he is, he rises before 5 am every day to milk cows and feedstock. In the growing season, he plants and tends crops; in winter, he hauls logs, helps fill the ice house, trains a team of young oxen, and sometimes—when his father can spare him—goes to school. The novel includes stories of his brother, Royal, and sisters, Eliza Jane and Alice.

“If our country can become great in humility, and can work earnestly to solve its own problems at the same time that it carries its share of world responsibilities, it will be through vision of our children, their integrity and idealism, gained in homes like the home in the ‘Little House’ books.”—The Horn Book

“Any boy or girl who has access to all the books in the series will be the richer for their first-hand record of pioneer life in the opening West and for their warm-hearted human values.”—The New Yorker

“One of the phenomenal achievements in modern literature for children, a genuine chronicle for American life and of family life at their equal best. Through these books Laura Ingalls of the 1870’s and ‘80’s has stepped from pages of the past into the flesh and blood reality of a chosen friend.”—The Horn Book

“Among the most popular books written for boys and girls are . . . the ‘Little House’ series which relates the experiences of the author’s own family . . . in establishing various homes in the days when the western lands were opened up to settlers.”—Library Journal

“It is a matter of great satisfaction and a cause for gratitude that . . . we can turn to such a group of stories as those (of) Mrs. Wilder . . . (They) ring true in every particular. Their authentic background, sensitive characterization, their fine integrity and spirit of sturdy independence, make them an invaluable addition to our list of genuine American stories.”—The New York Times