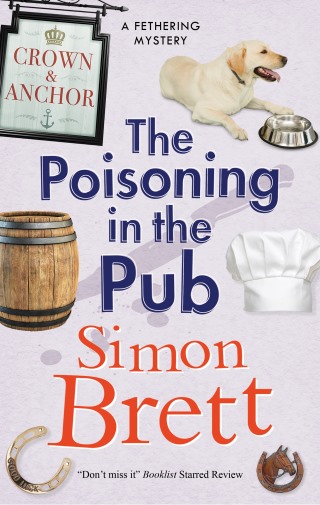 Poisoning in the Pub, The

Welcome to Fethering! Carole and Jude spring into amateur detective action when their favourite pub is targeted by a killer in this quirky, cozy, British village mystery. Jude and Carole get more than they bargained for when a lunchtime meal in their local pub leaves everyone with food poisoning. The landlord is horrified, and when a series of disasters start to befall his business it looks like it could be the end of the road for the Crown and Anchor. Left with a bad taste in their mouths - and not just from the food - the two amateur detectives wonder if it might just be more than a run of bad luck that's forcing their favourite pub into bankruptcy. When a young man is found in the kitchen of the pub, though, with a knife through his heart, Carole and Jude swing into action. There's a killer on the loose in Fethering, and Carole and Jude need to uncover who it is before it's last orders for the pub - and themselves.

Simon Brett: SIMON BRETT worked as a producer in radio and television before taking up writing full-time. He was awarded an OBE in the 2016 New Year's Honours for services to Literature and also was elected a Fellow of the Royal Society of Literature. In 2014 he won the CWA's prestigious Diamond Dagger for an outstanding body of work. simonbrett.com