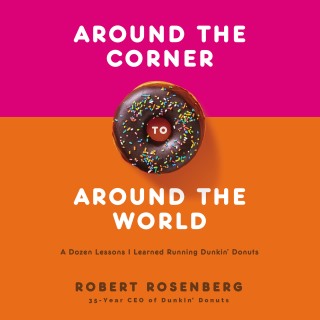 Learn twelve key lessons from Dunkin’ Donuts former CEO Robert Rosenberg that offer critical insights and a unique, 360-degree perspective to business leaders and managers on building one of the world’s most recognized brands.

For entrepreneurs fighting for survival and leaders in growing businesses facing critical strategic decisions, competition is always fierce, and the future is never certain.  Throughout all the chaos and the noise, you need a mentor that has seen a business through the ins and outs and can offer guidance that will exponentially tip the odds in your favor to succeed.

Robert Rosenberg took over as CEO of Dunkin’ Donuts in 1963, 13 years after the first restaurant was founded by his father, William. In his remarkable 35-year run, he grew the company from $10 million in sales to over $2 billion, with more than 3,000 outlets. Through his tenure, Robert learned important lessons on running and scaling a family business.

In Around the Corner to Around the World, Rosenberg shares his insider perspective on all the dramatic highs and lows that are part of the Dunkin’ Donuts story to guide you to your own success story.

Robert Rosenberg served as chief executive officer of Dunkin’ Donuts from 1963 until his retirement in 1998. Under his leadership, the company grew from a regional family business to one of America’s best known and loved brands. Rosenberg received his MBA from Harvard Business School, and in just weeks after graduating at the age of 25, assumed the position of chief executive officer. Dunkin’ Donuts was a publicly owned company from 1968 until 1989 and earned a reputation for extraordinary stockholder returns. In that 21-year period, it earned its investors a 35 percent compound rate of return.  After retiring from Dunkin, Rosenberg taught in the Graduate School at Babson College and served many years on the boards of directors of other leading food service companies, including Domino‘s Pizza and Sonic Restaurants.