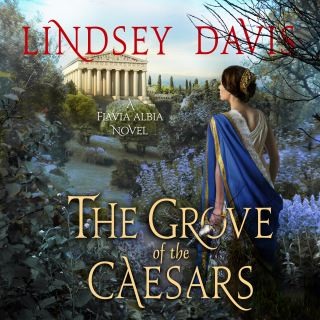 The Grove of the Caesars

In the sacred grove of Julius Caesar, something deadly stirs in the undergrowth—a serial killer, who haunted the gardens for years, has claimed another victim—in Lindsey Davis’s next historical mystery, The Grove of the Caesars.

At the feet of her adoptive father, renowned private informer Marcus Didius Falco, Flavia Albia learned a number of important rules. First and foremost—always keep one's distance from the palace, nothing good comes from that direction. But right behind it—murder is the business of the Vigiles, best to leave them to it.

Having broken the first rule more often than she'd like, it's no surprise to anyone when she finds herself breaking the second one. The public gardens named after the Caesars is a place nice girls are warned away from and when a series of bodies are uncovered, it seems that a serial killer has been haunting the grove for years. The case is assigned to one Julius Karus, a cohort of the Vigiles, but Albia is convinced that nothing will come of his efforts. Out of sympathy for the dead women and their grieving relatives, Albia decides to work with the vile Karus and bring the serial killer to justice.

"The audacious Flavia Albia returns...this one ends with a surprising conclusion that will make fans adore Flavia even more, if that is possible." -- Booklist

Lindsey Davis: Lindsey Davis was born and raised in Birmingham, England. After taking an English degree at Oxford and working for the civil service for thirteen years, she “ran away to be a writer.” Her internationally bestselling novels featuring ancient Roman detective Marcus Didius Falco include Venus in Copper, The Iron Hand of Mars, Nemesis and Alexandria. She is also the author of Rebels and Traitors, set during the English Civil War. Davis is the recipient of the Crime Writers’ Association Cartier Diamond Dagger Award, the highest accolade for crime writers, as well as the Ellis Peters Historical Dagger Award and the Authors' Club Best First Novel award.