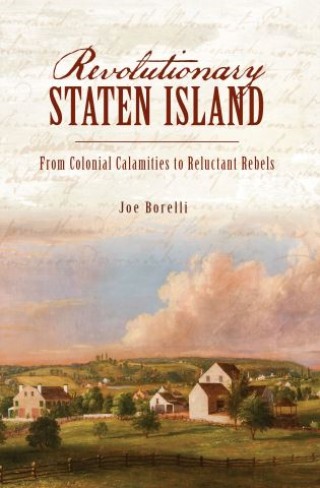 From Colonial Calamities to Reluctant Rebels

The shores of Staten Island were one of the first places Giovanni da Verrazzano and Henry Hudson landed in North America, and they became a safe harbor for thousands of refugees fleeing religious conflicts in Europe. As Dutch Staaten Eylandt and then English Richmond County, the island played a vital role in colonial development of the continent and the American Revolution. Rebel raids along the kills and inlets kept British forces and local Tories constantly battling for position, while Hessian and British troops occupied the island longer than any other county during the war. Staten Island's strategic location was used to launch counterstrikes against Washington's forces in New Jersey, while Major General John Sullivan led Continental army troops in defeat at the Battle of Staten Island. Author Joe Borelli reveals the colonial history of Richmond County and its role in the fight for American independence.

Joe Borelli: Joseph Borelli is a member and minority whip of the New York City Council, representing the South Shore of Staten Island since 2015. He also serves as the chairman of the council's committee on fire and emergency management, which has oversight over the FDNY and the office of Emergency Management. Prior to this, he was a member of the New York State Assembly, representing the Sixty-Second District of Staten Island between 2013 and 2015. Joe is also an adjunct professor of political science at the College of Staten Island and was a Lindsay Fellow at the CUNY Institute of State and Local Governance. He is a contributor to The Hill and regularly appears as a commentator on Fox News, Fox Business, CNN, CNNI, HLN, BBC, OAN, AM970 and WABC. He has also been published in the New York Daily News, New York Post, Washington Times, Washington Examiner, Staten Island Advance, Gotham Gazette and City and State NY. He serves as a spokesman for the New York State Republican Party. Joe received a BA in history from Marist College and an MA in history from the College of Staten Island at the City University of New York. He lives in Annadale with his wife, Rachel; two sons, Joseph Jr. and John; and an overweight English bulldog named Luna.