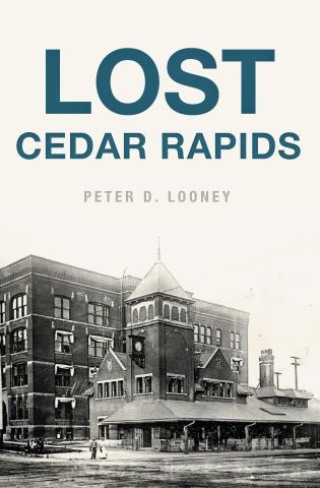 Cedar Rapids is the only city in America to house its government offices on an island. But tons of other iconic structures that defined the city are no longer around. The Little Gallery on First Avenue was created to showcase local artists. Yager's "moved up to bring prices down." The area was home to thirty-nine theaters, including two from 1928 that are still in operation. From the hotels to the factories, the ethnic districts to the depots, the dance halls to the amusement parks, these are the places that made a difference in the City of Five Seasons. Local author Pete Looney traces the history of the structures.

Peter D. Looney: Peter D. Looney is a lifelong Iowan who grew up on a small farm near the small town of Solon, situated between Cedar Rapids and Iowa City. Due to his passion for rock music, the bulk of his past writing has involved the eastern Iowa music scene, where he has profiled more than one hundred local bands for the Cedar Rapids Gazette's Hoopla magazine. His fascination with local history led to extensive probing of the history of the area's past music venues and clubs, which led to his collection of photographs and stories of almost every other "lost" business and landmark in the area.