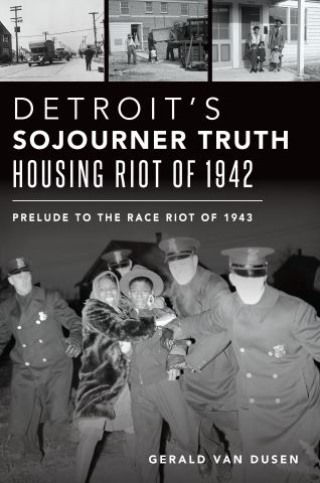 During World War II, no American city suffered a worse housing shortage than Detroit, and no one suffered that shortage more than the city's African American citizens. In 1941, the federal government began constructing the Sojourner Truth Housing Project in northeast Detroit to house 200 black war production workers and their families. Almost immediately, whites in the neighborhood vehemently protested. On February 28, 1942, a confrontation between black tenants and white protesters erupted in a riot that sent at least 40 to the hospital and more than 220 to jail. This confrontation was the precursor to the bloodiest race riot of the war just sixteen months later. Gerald Van Dusen, author of Detroit's Birwood Wall, unfolds the background and events of this overlooked moment in Motor City history.

Gerald Van Dusen: Gerald Van Dusen is professor of English at Wayne County Community College District in Detroit, Michigan. He is author of William Starbuck Mayo, The Virtual Campus, Digital Dilemma and Canton Township. His scholarly interests include American literature and culture and local history, as well as digital technology applications in higher education. A recipient of numerous awards for innovations in teaching, learning and technology, Van Dusen is a father of four and resides with Patricia, his wife of forty years, in Plymouth, Michigan.