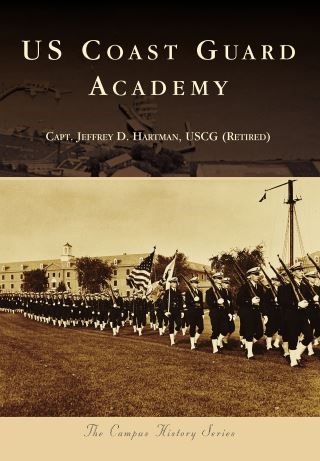 The predecessor of the US Coast Guard (USCG) was the Revenue Marine, formed to enforce the customs laws. The officers for the service were drawn from the Merchant Marines, and occasionally the US Navy, and political connections were often more important than competency. To ensure consistent training, the original Revenue Cutter School of Instruction became the US Coast Guard Academy, moving to its present location in New London, Connecticut, in 1932. Prior to that, instruction had been afloat on four different vessels, known as cutters, and ashore in New Bedford, Massachusetts; Curtis Bay, Maryland; and Fort Trumbull in New London. The training has grown from a two-year program, providing primarily practical seamanship, to one of the highest ranked small engineering undergraduate schools in the nation, offering nine majors and graduating male and female officers with a liking for the sea and its lore.

Jeffrey Hartman: Capt. Jeffrey D. Hartman, USCG (retired) is a helicopter pilot with 30 years of service. He graduated from the academy in 1963. He twice served on the US Coast Guard Academy Alumni Board of Directors. He commanded an air station in Puerto Rico and had four tours in Alaska, including management of the emergency response program for the state waters. He has two master's degrees in business and public administration and graduated from the Armed Forces Staff College. This is his third book and second with Arcadia Publishing.