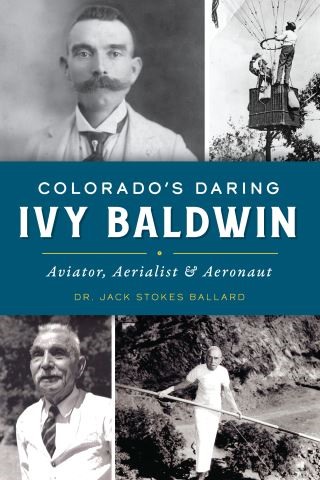 At the beginning of the twentieth century, aerialist Ivy Baldwin had achieved celebrity status as a premier tightrope walker, aeronaut and aviation pioneer. He executed astonishing and perilous performances across America and internationally, including Mexico and the Far East. First by flying balloons, he went on to pilot dirigibles and, finally, aircraft. In his later years in Colorado, he became famous for crossing canyons on a tightrope. Historian Jack Stokes Ballard deftly captures Baldwin's colorful and hazardous life from childhood runaway to aviation record holder.

Dr. Jack Stokes Ballard: Jack Stokes Ballard holds a Doctorate of Philosophy in American history from UCLA, taught history at the Air Force Academy and AFROTC at Occidental College, served a career in the U.S. Air Force and retired as chief of the Plans and Requirements Division at Lowry Air Force Base. He worked for the Martin Marietta Corporation for twelve years. He is the author of eight books.