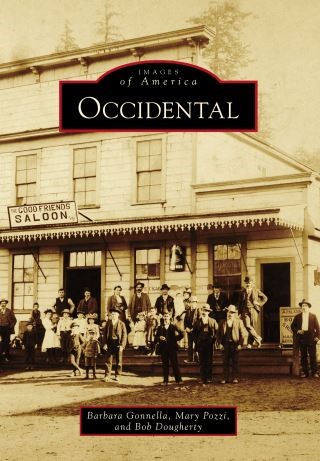 Occidental is a picturesque village in West Sonoma County nestled between the Salmon Creek and Dutch Bill Creek watersheds. William "Dutch Bill" Howard is considered the first permanent European settler in 1849, but he was not Dutch, and his name was not Bill--he was actually Danish and had assumed a new identity after deserting a ship to look for gold. Howard and another early settler, logging baron "Boss" Meeker, were instrumental in shaping early Occidental. The North Pacific Coast Railroad arrived in 1876, requiring construction of the country's tallest timber bridge. The railroad allowed much faster communication and transportation of people and goods, including redwood, charcoal, tanbark, and produce. Italians also started arriving in the 1870s, opening authentic Italian restaurants that have now served generations of families. In the 1970s, a culture clash occurred between ranchers and farmers with hippies and artists, but together they fought to maintain the beauty and character of Occidental.

Bob Dougherty: Union Hotel proprietor Barbara Gonnella and educator Mary Pozzi worked with author Bob Dougherty and local historians to create this visual history of Occidental. Many unpublished photographs are drawn from the Gonnella and other private collections as a tribute to the pioneers of this unique community.||||||