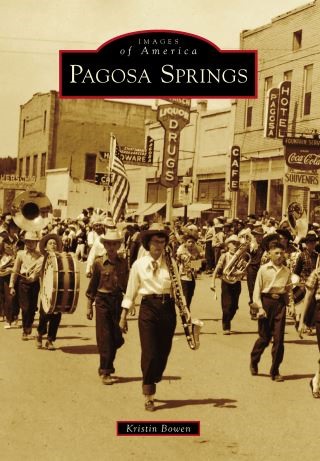 When the first government expeditions came through the southwest Colorado region, the Ute Indians were living in a wide area that included the hot springs that they had named Pah-gosa. The Army chose the hot springs as the first--though short-lived--location of Fort Lewis. After the Army left, forward-thinking speculators incorporated the town in 1891. These early settlers believed that the natural wonders nestled in the beauty of the San Juan Mountains could be developed into a world-class spa resort. Timber and ranching were the dominant industries and ways of life in the area throughout the 20th century. The images presented in this book feature these industries, as well as town businesses, churches, schools, surrounding forests, residents, events, and celebrations. Pagosa Springs has become the spa destination early settlers envisioned, yet it holds onto and celebrates its Western heritage.

Kristin Bowen: Author Kristin Bowen is passionate about preserving history and sharing it with everyone. She has compiled an array of photographs from family collections--including those of Pagosa's most famous resident artist, Fred Harman--and the archives of the Denver Public Library and the Center of Southwest Studies at Fort Lewis College to produce this pictorial history of Pagosa Springs and Archuleta County.