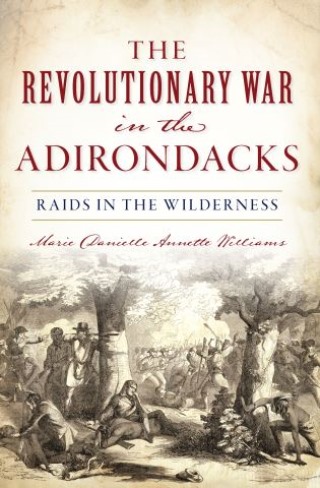 The Revolutionary War in the Adirondacks

Raids in the Wilderness

Much of New York during the Revolutionary era was frontier wilderness, sparsely populated and bitterly divided. Although the only major campaign in the region would end at the Battle of Saratoga, factional raiding parties traversed the mountains and valleys of the Adirondacks throughout the war. Sir Christopher Carleton led groups of Loyalists, Hessians and Iroquois in successful attacks along Lake Champlain, capturing forts and striking fear in local villages. Mohawk war chief Joseph Brant led a motley band of irregulars known as "Brant's Volunteers" in chaotic raids against Patriot targets. Marauding brothers Edward and Ebenezer Jessup brought suffering to the very lands they had purchased years before in Kingsbury, Queensbury and Fort Edward. Author Marie Danielle Annette Williams covers the history of the Adirondacks during the Revolutionary War.

Marie Danielle Annette Williams: Marie Danielle Annette Williams is an independent historian living in Upstate New York. She received her Bachelors of Arts degree in social studies adolescent education from The College of Saint Rose in Albany, NY in 2014 and received her Masters of Arts degree in American history from Southern New Hampshire University in Manchester, NH in 2018. She has been writing about American history since 2011 on her blog titled "The Half-Pint Historian Blog" and has contributed articles to "The Adirondack Almanack" and "The New York History Blog".