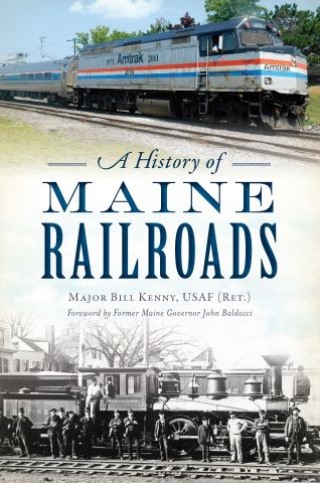 A History of Maine Railroads

Maine is populated with intriguing characters who set in motion a fascinating, compelling story of railroads and the unique communities they helped to build. One of the first states to build railroads and trolleys in the United States, Maine at one point had more than ninety communities with trolleys. Standard-gauge and "two-footers" crossed the state, including the St. Lawrence & Atlantic and the Bangor & Aroostook. From an international electric trolley to the attempted World War I dynamiting of a railroad bridge between the United States and Canada, the state is home to a rich rail heritage. Join Bill Kenny as he takes you on a journey from the first tracks made of wood to today's high-speed Downeaster Amtrak train.

Major Bill Kenny USAF (Ret.): Bill Kenny, a former career U.S. Air Force officer and Gulf War veteran, developed a lifelong interest in trains from a very young age. From his first train ride at age eleven to his intensive planning and coordination of the movements by rail and ship of military equipment from the United States and Europe for Desert Shield/Desert Storm, the overseeing of railroad operations at Eielson Air Force Base in Alaska and Loring Air Force Base in northern Maine and being involved in a global logistics career that planned and coordinated the movement of large equipment around the world by rail and shipping for major industrial companies, his many railroad experiences have provided a lifelong interest, education and love of railroads and their history.
As an adjunct professor in public and international affairs, international economics and organizational leadership, his experiences obtained from a career involving global economics and shipping by rail enable him to help his many students understand the importance of worldwide economies in today's world through the use of railroads.
The history of Maine railroads is a prime example of how railroads affect economies, and this author, born in Maine and now living near Maine's largest railroad yard, has experienced this firsthand. His realization that Maine's history of railroads needs to be recorded, preserved and appreciated prompted the writing of this book, his first.