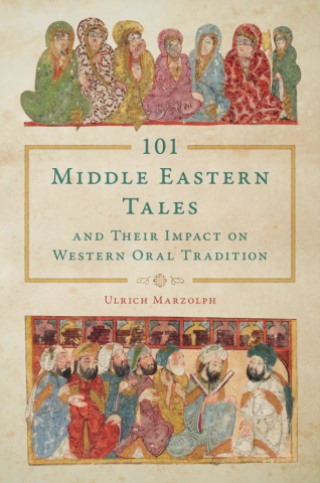 101 Middle Eastern Tales and Their Impact on Western Oral Tradition

Against the methodological backdrop of historical and comparative folk narrative research, 101 Middle Eastern Tales and Their Impact on Western Oral Tradition surveys the history, dissemination, and characteristics of over one hundred narratives transmitted to Western tradition from or by the Middle Eastern Muslim literatures (i.e., authored written works in Arabic, Persian, and Ottoman Turkish). For a tale to be included, Ulrich Marzolph considered two criteria: that the tale originates from or at least was transmitted by a Middle Eastern source, and that it was recorded from a Western narrator’s oral performance in the course of the nineteenth or twentieth century. The rationale behind these restrictive definitions is predicated on Marzolph’s main concern with the long-lasting effect that some of the "Oriental" narratives exercised in Western popular tradition—those tales that have withstood the test of time. Marzolph focuses on the originally "Oriental" tales that became part and parcel of modern Western oral tradition. Since antiquity, the "Orient" constitutes the quintessential Other vis-à-vis the European cultures. While delineation against this Other served to define and reassure the Self, the "Orient" also constituted a constant source of fascination, attraction, and inspiration. Through oral retellings, numerous tales from Muslim tradition became an integral part of European oral and written tradition in the form of learned treatises, medieval sermons, late medieval fabliaux, early modern chapbooks, contemporary magazines, and more. In present times, when national narcissisms often acquire the status of strongholds delineating the Us against the Other, it is imperative to distinguish, document, visualize, and discuss the extent to which the West is not only indebted to the Muslim world but also shares common features with Muslim narrative tradition. 101 Middle Eastern Tales and Their Impact on Western Oral Tradition is an important contribution to this debate and a vital work for scholars, students, and readers of folklore and fairy tales.

Ulrich Marzolph: Ulrich Marzolph is a retired professor of Islamic Studies at the Georg-August-University in Göttingen, Germany. His field of expertise is the narrative culture of the Muslim world. His most recent book is Relief after Hardship: The Ottoman Turkish Model for the Thousand and One Days (Wayne State University Press, 2017).