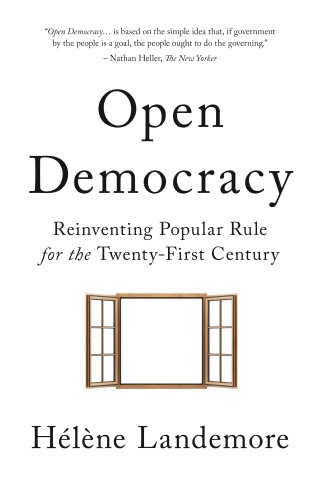 "Open Democracy envisions what true government by mass leadership could look like."—Nathan Heller, New Yorker
How a new model of democracy that opens up power to ordinary citizens could strengthen inclusiveness, responsiveness, and accountability in modern societies

To the ancient Greeks, democracy meant gathering in public and debating laws set by a randomly selected assembly of several hundred citizens. To the Icelandic Vikings, democracy meant meeting every summer in a field to discuss issues until consensus was reached. Our contemporary representative democracies are very different. Modern parliaments are gated and guarded, and it seems as if only certain people—with the right suit, accent, wealth, and connections—are welcome. Diagnosing what is wrong with representative government and aiming to recover some of the lost openness of ancient democracies, Open Democracy presents a new paradigm of democracy in which power is genuinely accessible to ordinary citizens.

Hélène Landemore favors the ideal of “representing and being represented in turn” over direct-democracy approaches. Supporting a fresh nonelectoral understanding of democratic representation, Landemore recommends centering political institutions around the “open mini-public”—a large, jury-like body of randomly selected citizens gathered to define laws and policies for the polity, in connection with the larger public. She also defends five institutional principles as the foundations of an open democracy: participatory rights, deliberation, the majoritarian principle, democratic representation, and transparency.

Open Democracy demonstrates that placing ordinary citizens, rather than elites, at the heart of democratic power is not only the true meaning of a government of, by, and for the people, but also feasible and, today more than ever, urgently needed.

Hélène Landemore: Hélène Landemore is associate professor of political science at Yale University. She is the author of Democratic Reason (Princeton) and Hume. Twitter @landemore