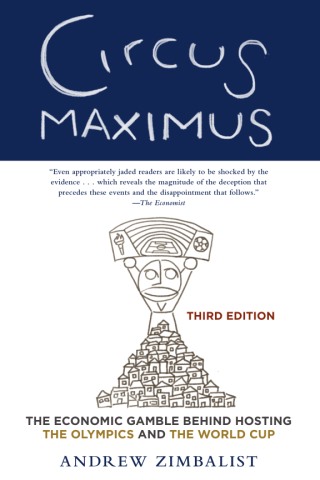 The Economic Gamble Behind Hosting the Olympics and the World Cup

Beyond the headlines of the world’s most beloved sporting events

Brazil hosted the 2016 men’s World Cup at a cost of $15 billion to $20 billion, building large, new stadiums in cities that have little use for them anymore. The projected cost of Tokyo’s 2020 Summer Olympic Games is estimated to be as high as $30 billion, much of it coming from the public trough. In the updated and expanded edition of his bestselling book, Circus Maximus: The Economic Gamble Behind Hosting the Olympics and the World Cup, Andrew Zimbalist tackles the claim that cities chosen to host these high-profile sporting events experience an economic windfall. In this new edition he looks at upcoming summer and winter Olympic games, discusses the recent Women’s World Cup, and the upcoming men’s tournament in Qatar.

Circus Maximus focuses on major cities, like London, Rio, and Barcelona, that have previously hosted these sporting events, to provide context for future host cities that will bear the weight of exploding expenses, corruption, and protests. Zimbalist offers a sobering and candid look at the Olympics and the World Cup from outside the echo chamber.

Andrew Zimbalist earned a B.A. from the University of Wisconsin at Madison and an M.A. and Ph.D. from Harvard University. He has been in the economics department at Smith College since 1974 and has been a visiting professor at Doshisha University, the University of Geneva, and Hamburg University. Zimbalist has consulted in Latin America for the United Nations Development Program, the U.S. Agency for International Development, and numerous companies. He has consulted in the sports industry for players' associations, cities, companies, teams, and leagues, and has published twenty-five books.