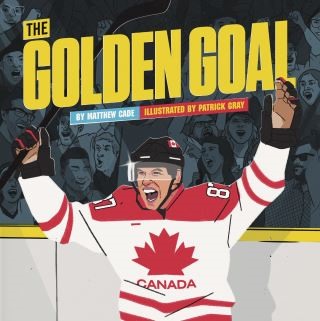 And faster than you could blink—not a second, but a fraction—

It slipped through his pads and like that it was done,

The country erupted—Canada had won!

The Vancouver Olympics, 2010. Canada’s best hockey players battle Team USA for the Olympic gold medal in men’s hockey. The stakes are high, and the game starts off fast with both teams fighting for the puck. At the end of the second period, Canada is ahead 2-1 and the gold medal is within reach. Then, with minutes left in the third period, the US scores to tie the game. With millions of Canadians on the edge of their seats, the game goes into overtime and thirteen minutes in, Sidney Crosby shoots and scores. Sid the Kid and one of the greatest hockey teams ever assembled clinches the gold medal on home ice for Canada, the birthplace of hockey.

The Golden Goal captures the energy and excitement of the game and celebrates the tenth anniversary of this iconic moment in Canadian history. Perfect for reading aloud and sharing with kids of all ages.