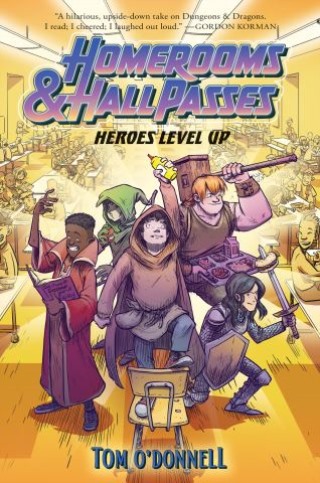 Months after saving suburbia from destruction, our heroes are back to their old lives of dungeon delving and magical quests. All except the wizard Albiorix, who has given up adventuring and uses his time trying (unsuccessfully) to create his own board game.

When the party finds their old friend June Westray’s smartphone for sale in a Bríandalörian bazaar, however, they fear the Realm of Suburbia is under threat.

Thus, the five young adventurers must travel back into Homerooms & Hall Passes, a role-playing game where they assume the characters of average American kids. This time they’re at Level 9 and will face a whole new set of challenges: their freshman year of high school!

There are different cliques, different rules, and higher stakes. And if that wasn’t stressful enough, the heroes must track down an evil spellbook, defeat a sinister foe, and figure out how to get back home . . . .

“You can’t help falling in love with this hilarious upside-down take on Dungeons & Dragons. I read; I cheered; I laughed out loud.”—Gordon Korman on Homerooms and Hall Passes

Tom O’Donnell is the author of the Hamstersaurus Rex series as well as Space Rocks and its sequel, Space Rocks 2: For the Love of Gelo! He has written for the New Yorker, McSweeney’s, and the show TripTank on Comedy Central. His comic strips have been featured in the New York Press and the Village Voice. He lives with his family in Brooklyn, New York. Read more at www.tomisokay.com.