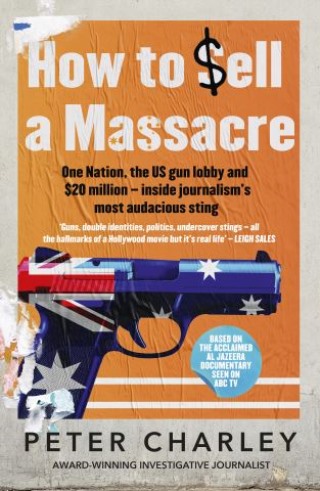 How to Sell a Massacre

One Nation, the NRA and $20 million -- inside journalism's most audacious sting

In 2019, the ABC aired an explosive investigative documentary entitled How to Sell a Massacre. The result of an audacious three-year infiltration of the US National Rifle Association, the documentary revealed how One Nation solicited donations of up to $20 million from the NRA, promising in return to use the balance of power to soften gun laws in Australia. Masterminded by veteran Australian journalist Peter Charley, the elaborate sting saw Australian businessman Rodger Muller go undercover as the head of a fake Australian pro-gun advocacy group. But the tactics used by Charley to expose both One Nation and the NRA drew criticism from some.

Now in his book How to Sell a Massacre, Peter Charley gives an inside account of the sting, drawing on more than 40 years' reporting to explore how journalism has changed and to make sense of why -- in a post-truth environment -- he felt it necessary to set a trap to catch the truth. Charley draws on previously unreleased transcripts of covertly recorded meetings between the NRA and One Nation to give graphic details of the undercover operation. At the same time, he reflects on a long and distinguished career and how the role and methods of journalism have had to change and adapt in a post-truth world.

Set during the period of Donald Trump's rise to power and the US's worst mass shootings, including Las Vegas and Orlando, How to Sell a Massacre reads like a pacey spy thriller with a deadly truth at its heart: that an Australian political party would seek foreign money in a bid to seize power and destroy the gun laws that keep Australians safe.

Peter Charley began his career as a reporter on the Sydney Morning Herald and the Sydney Sun newspapers. He later worked as an on-air current affairs reporter and producer at the Seven Network before moving to New York, where he worked as associate producer at Sixty Minutes and as a reporter for National Public Radio. He was appointed show producer of the weekly, current affairs program The Reporters before working as executive producer of the ABC's Lateline then SBS's Dateline. In 2014, Peter took up the role of executive producer of Al Jazeera's North American investigative unit based in Washington DC. A BAFTA finalist, he is the recipient of countless Australian and international awards for his journalism, including seven New York Festivals gold medals and two Walkleys. For his documentary How to Sell a Massacre, he received the Kennedy Award for Outstanding Investigative Reporting, the Walkley Scoop of the Year Award and his seventh New York Festival gold medal.