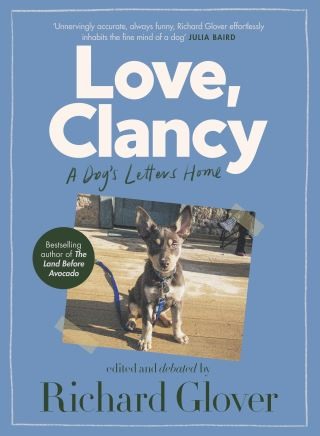 A dog's letters home, edited and debated by Richard Glover

Heartfelt and hilarious, this is a book for anyone who has tried to imagine what their dog was thinking.

Human beings often write about their dogs, but the dogs don't usually get a right of reply. In Love, Clancy, Richard Glover has collated the letters sent by Clancy to his parents in the bush. They are full of a young dog's musings about the oddities of human behaviour, life in the big city, and his own attempts to fit in. You'll meet Clancy as a puppy, making his first attempt to train his humans, then see him grow into a mature activist, demanding more attention be paid to a dog's view of the world. Along the way, there are adventures aplenty, involving robotic vacuum cleaners, songs about cheese, trips to the country and stolen legs of ham - all told with a dog's deep wisdom when it comes to what's important in life.

The Land Before Avocado

'This is vintage Glover - warm, wise and very, very funny. Brimming with excruciating insights into life in the late sixties and early seventies, The Land Before Avocado explains why this was the cultural revolution we had to have' Hugh Mackay

'Hilarious and horrifying, this is the ultimate intergenerational conversation starter' Annabel Crabb

'Richard Glover's just-published The Land Before Avocado is a wonderful and witty journey back in time to life in the early 1970s' Richard Wakelin, Australian Financial Review

Richard Glover has written a number of bestselling books, including The Land Before Avocado, Flesh Wounds and The Mud House. He writes regularly for the Sydney Morning Herald and The Washington Post, as well as presenting the comedy program Thank God It's Friday on ABC Local Radio. To find out more, visit www.richardglover.com.au