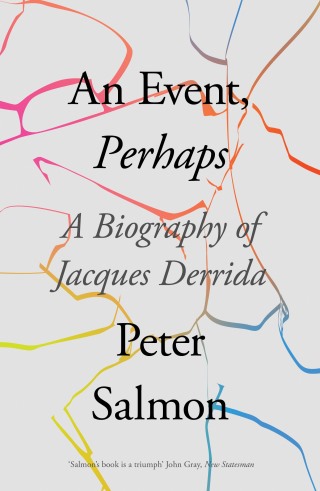 A Biography of Jacques Derrida

Who is Jacques Derrida? For some, he is the originator of a relativist philosophy responsible for the contemporary crisis of truth. For the far right, he is one of the architects of Cultural Marxism. To his academic critics, he reduced French philosophy to “little more than an object of ridicule.” For his fans, he is an intellectual rock star who ranged across literature, politics, and linguistics. In An Event, Perhaps, Peter Salmon presents this misunderstood and misappropriated figure as a deeply humane and urgent thinker for our times.

Born in Algiers, the young Jackie was always an outsider. Despite his best efforts, he found it difficult to establish himself among the Paris intellectual milieu of the 1960s. However, in 1967, he changed the whole course of philosophy: outlining the central concepts of deconstruction. Immediately, his reputation as a complex and confounding thinker was established. Feted by some, abhorred by others, Derrida had an exhaustive breadth of interests but, as Salmon shows, was moved by a profound desire to understand how we engage with each other. It is a theme explored through Derrida’s intimate relationships with writers sucheven as Althusser, Genet, Lacan, Foucault, Cixous, and Kristeva.

Accessible, provocative and beautifully written, An Event, Perhaps will introduce a new readership to the life and work of a philosopher whose influence over the way we think will continue long into the twenty-first century.

Peter Salmon: Peter Salmon was born in Australia but now lives in the UK. His first novel The Coffee Story was a New Statesman Book of the Year. He has written for the Guardian, the Sydney Review of Books, the New Humanist, as well as Australian TV and radio. He has received the Writer's Awards from the Arts Council of England and the Arts Council of Victoria, Australia. Formerly Centre Director of the John Osborne/The Hurst Arvon Centre (2006-2012), he also teaches creative writing, most recently at Pembroke College, Cambridge, and Liverpool John Moores University.