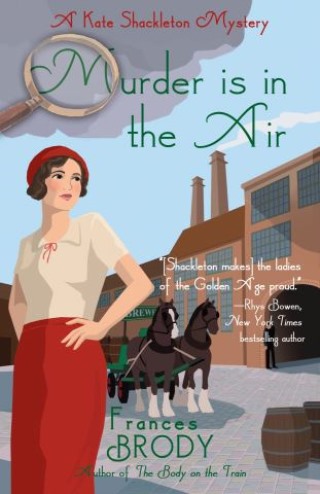 Murder is in the Air

A competition for the crown proves deadly when confidences are betrayed and secrets are spilled.

North Yorkshire, 1930. It's the season for warm and spirited countryside celebrations. Ever since the war, pubs have been in the doldrums, and in an attempt to promote and breathe new life back into the business, brewers select a charismatic employee as local queen--to be the face of their industry. And this year's queen, wages clerk Ruth Parnaby, has invited the ever intrepid Kate Shackleton and her niece Harriet to accompany her on public engagements at a garden party thrown in her honor. But when Ruth leads children to the stables for pony rides, the drayman is missing, later found in the last place imaginable--the fermentation room, deceased.

What looked to be a simple case of asphyxiation in the dangerous fermentation room is quickly clarified by the pathologist as murder--the drayman was already dead before he was taken into the room. Someone was looking to cover it up. The horse dealer who sold the pony to the drayman comes under suspicion, but more and more Ruth's nasty father, Slater Parnaby's strong motive to dissuade his daughter from any festivities lingers in Kate's mind, despite his having an alibi. The case is muddy, at best, and it's going to take Kate at her keenest to decipher the truth.

Frances Brody: Frances Brody lives in Leeds where she was born and grew up. After leaving school at 16, she worked and traveled, including a spell in New York. She then won a place at Ruskin College, Oxford, and afterwards studied at York University. Before creating the Kate Shackleton mysteries, Frances wrote historical sagas, winning the HarperCollins Elizabeth Elgin award for most regionally evocative debut saga of the millennium. When not writing or reading, Frances likes to test her less than brilliant map reading skills by walking in the Yorkshire Dales.