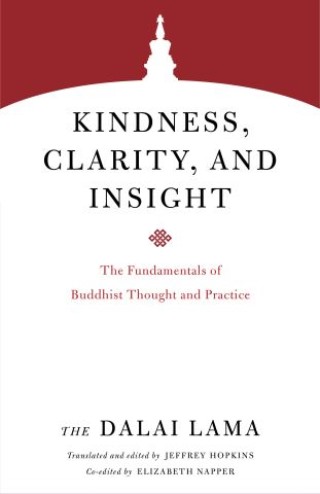 The Fundamentals of Buddhist Thought and Practice

This beloved classic brings together in one volume all the major themes of the Dalai Lama's teachings such as religious values, the four noble truths, karma, compassion, and meditation.

Drawn from the lectures he gave during his first three visits to North America, the book covers the core subject matter of Tibetan Buddhism, as presented for the first time to an English-speaking audience. The chapters are arranged developmentally from simple to complex topics, which include the luminous nature of the mind, the four noble truths, karma, the common goals of the world's religions, meditation, deities, and selflessness. Central to all these teachings is the necessity of compassion--which the Dalai Lama says is "the essence of religion" and "the most precious thing there is."

The Dalai Lama: THE DALAI LAMA is considered the foremost Buddhist leader of our time. The exiled spiritual head of the Tibetan people, he is a Nobel Peace Laureate, a Congressional Gold Medal recipient, and a remarkable teacher and scholar who has authored over one hundred books.