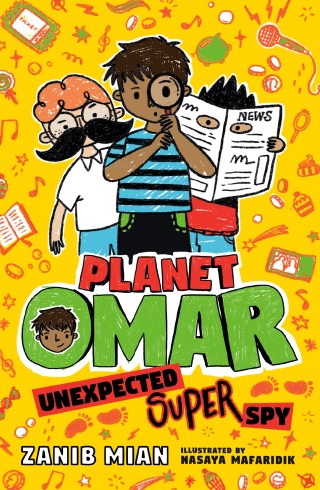 Omar is back with a big mystery to solve in the second installment of this imaginative, highly-illustrated middle-grade series.

When Omar hears that his family's favorite mosque is at risk of shutting down due to lack of funds, he knows he has to do something. And with the help of his best friend Charlie and another unlikely ally, a great idea is born--a school talent contest!

Omar and his friends are super excited about their plan, that is until Omar's sister, Maryam, decides she and her friends are going to raise money, too, and the competition is on. The boys' talent show is a huge success but disaster strikes right at the end--all the money goes missing. Omar has no choice but to become a super spy to track down a foe much more wily than his sister.

Omar's amazing imagination brings the second story in his adventures to life as he navigates more of life's ups and downs. From sibling brawls to speaking to the scary principal and becoming a community activist, bold illustrations and cheeky dialogue show how Omar perseveres through serious and silly adversity.

Zanib Mian: Zanib Mian was a science teacher before launching a small independent publisher, Muslim Children's Books. Passionate about representation in children's publishing, she is on the panel of judges for the prestigious Young Muslim Writers Awards.

Nasaya Mafaridik is based in Indonesia. Self-taught, she has a passion for children's books and bright, colourful stationery.