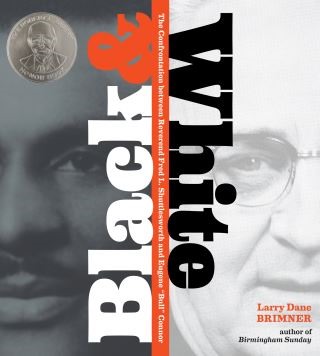 In the nineteen fifties and early sixties, Birmingham, Alabama, became known as Bombingham. At the center of this violent time in the fight for civil rights, and standing at opposite ends, were Reverend Fred L. Shuttlesworth and Eugene "Bull" Connor. From his pulpit, Shuttlesworth agitated for racial equality, while Commissioner Connor fought for the status quo. Relying on court documents, police and FBI reports, newspapers, interviews, and photographs, author Larry Dane Brimner first covers each man's life and then brings them together to show how their confrontation brought about significant change to the southern city. The author worked closely with Birmingham's Civil Rights Institute as well as with Reverend Fred L. Shuttlesworth and his wife to bring together this Robert F. Sibert Honor Book, ALA Notable Children's book, and Kirkus Reviews Best Children's Book of the Year.

Larry Dane Brimner: Larry Dane Brimner is the recipient of the 2018 Robert F. Sibert Award for the most distinguished informational book for children for his title Twelve Days in May: Freedom Ride 1961. He is known for his well-researched, innovative, and award-winning nonfiction for young readers, and is the author of multiple acclaimed civil rights titles, including Strike!: The Farm Workers' Fight for Their Rights; and Black & White: The Confrontation between Reverend Fred L. Shuttlesworth and Eugene "Bull" Connor.