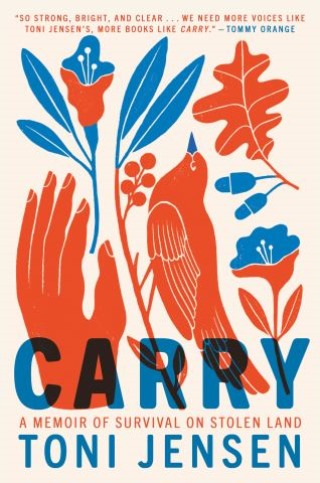 A Memoir of Survival on Stolen Land

A powerful, poetic memoir about what it means to exist as an indigenous woman in America, told in snapshots of the author’s encounters with gun violence.


“Essential . . . We need more voices like Toni Jensen’s, more books like Carry.”—Tommy Orange, New York Times bestselling author of There There
Toni Jensen grew up around guns: As a girl, she learned to shoot birds in rural Iowa with her father, a card-carrying member of the NRA. As an adult, she’s had guns waved in her face near Standing Rock, and felt their silent threat on the concealed-carry campus where she teaches. And she has always known that in this she is not alone. As a Métis woman, she is no stranger to the violence enacted on the bodies of indigenous women, on indigenous land, and the ways it is hidden, ignored, forgotten.

In Carry, Jensen maps her personal experience onto the historical, exploring how history is lived in the body and redefining the language we use to speak about violence in America. In the title chapter, Jensen connects the trauma of school shootings with her own experiences of racism and sexual assault on college campuses. “The Worry Line” explores the gun and gang violence in her neighborhood the year her daughter was born. “At the Workshop” focuses on her graduate school years, during which a workshop classmate repeatedly killed off thinly veiled versions of her in his stories. In “Women in the Fracklands,” Jensen takes the reader inside Standing Rock during the Dakota Access Pipeline protests and bears witness to the peril faced by women in regions overcome by the fracking boom.

In prose at once forensic and deeply emotional, Toni Jensen shows herself to be a brave new voice and a fearless witness to her own difficult history—as well as to the violent cultural landscape in which she finds her coordinates. With each chapter, Carry reminds us that surviving in one’s country is not the same as surviving one’s country.

Toni Jensen: Toni Jensen teaches in the MFA programs at the University of Arkansas and the Institute of American Indian Arts. She is a 2020 recipient of a Creative Writing Fellowship from the National Endowment for the Arts, and her work has been published in Orion, Catapult, and Ecotone. She is Métis.