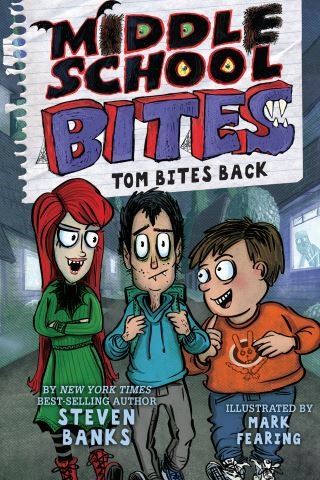 Tom the Vam-Wolf-Zom is back - and so is the vampire bat that bit him - in this monstrously funny series about a boy who's dying to fit in.

"What are you waiting for? Open this book right now!" - Tom Angleberger, New York Times best-selling author of the Origami Yoda series

Eleven-year-old Tom was bit by a vampire, a werewolf, and a zombie right before the first day of middle school. It was a weird and crazy day. And the worst part? Even a Vam-Wolf-Zom needs to go to sixth grade. At least his neighbors and classmates seem to have accepted him. Annie even wants him to join her band!

Plus, there are some cool things about having vampire and werewolf traits. Tom has night vision now, and he's super-fast and strong. (There's nothing cool about being a zombie.) Maybe life as a Vam-Wolf-Zom will be as EXCELLENT as his best friend, Zeke, predicted.

But when the bat that bit Tom shows up again, and speaks to him, he knows it's time for a new plan. Tom's laugh-out-loud adventures continue as he navigates normal sixth grade stuff - singing in a band, dressing up for Halloween, tolerating his older sister - despite being the only Vam-Wolf-Zom known to humankind.

Created by an Emmy-nominated writer for SpongeBob, The Adventures of Jimmy Neutron, and CatDog, this hilarious series is illustrated with clever, cartoon-style art on every spread. Don't miss Middle School Bites, the first book in the series!

Steven Banks: Steven Banks is a New York Times best-selling writer who received an Emmy nomination as head writer on SpongeBob SquarePants, wrote for The Adventures of Jimmy Neutron and CatDog, has appeared on TV shows like Penn & Teller's Fool Us, attended Ringling Brothers and Barnum and Bailey Clown College, wrote a book called King of the Creeps, co-created the international theater sensation Shadowland, and lives in California with his wife. He was once bitten by a donkey, but did not turn into a Donkey Man.

Mark Fearing has never been bitten by a werewolf, a zombie, or a vampire. But he was bitten by the creative bug which is far more dangerous. Books he's illustrated include The Three Little Aliens and the Big Bad Robot, by Margaret McNamara, and Ben Franklin's in My Bathroom!, by Candace Fleming, as well as The Great Thanksgiving Escape, which he also wrote. He lives in Oregon with his family.