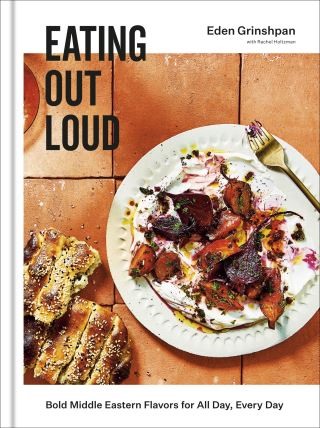 Bold Middle Eastern Flavors for All Day, Every Day: A Cookbook

“Finally! Eden Grinshpan is letting us in on her secrets of her healthful and deliriously delicious cooking. Giant flavors, pops of color everywhere and dishes you’ll crave forever. It’s the Eden way!”—Bobby Flay

Eden Grinshpan’s accessible cooking is full of bright tastes and textures that reflect her Israeli heritage and laid-back but thoughtful style. In Eating Out Loud, Eden introduces readers to a whirlwind of exciting flavors, mixing and matching simple, traditional ingredients in new ways: roasted whole heads of broccoli topped with herbaceous yogurt and crunchy, spice-infused dukkah; a toasted pita salad full of juicy summer peaches, tomatoes, and a bevy of fresh herbs; and babka that becomes pull-apart morning buns, layered with chocolate and tahini and sticky with a salted sugar glaze, to name a few.

For anyone who loves a big, boisterous spirit both on the plate and around the table, Eating Out Loud is the perfect guide to the kind of meal—full of family and friends eating with their hands, double-dipping, and letting loose—that you never want to end.

Eden Grinshpan: Eden Grinshpan is a chef, food personality, and the current host of Top Chef Canada. After earning her culinary degree at Le Cordon Bleu in London, Eden found herself chasing big flavors around the world, cooking in restaurants, and eating her way across Europe, India, Southeast Asia, and of course Israel, from which her family hails. She conceptualized, produced, and hosted Eden Eats, her first culinary travel show for the Cooking Channel. Her career in television sparked, Eden then went on to host and judge a multitude of television shows, including, Log On and Eat with Eden Grinshpan and Chopped Canada. Eden lives in Brooklyn with her husband, Ido, and their daughter, Ayv.