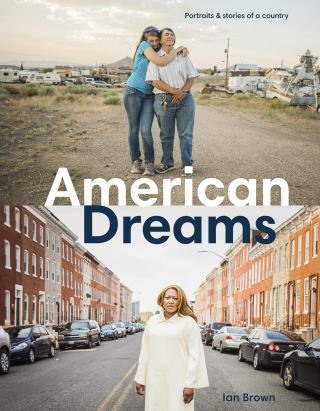 Portraits & Stories of a Country

A powerful, moving collection of 170 portraits of Americans and their handwritten statements about what the American dream means to them.

Shot by one photographer over twelve years, fifty states, and eighty thousand miles, American Dreams is a poignant, defining look at people from every walk of life and a remarkable exploration of what it means to be an American.

Long fascinated by the idea of the “American Dream,” Canadian photographer Ian Brown set out to document, in photographs and words, what that dream means to Americans of all ages, races, identities, classes, religions, and ideologies. Over the course of twelve years, Brown traveled more than eighty thousand miles in an old truck, visiting all fifty states and connecting with hundreds of Americans. He knocked on people's doors; met them at town halls, diners, and factories; and approached them on main streets in small towns. He shot their portraits and asked them to write down their own American dreams. Their dreams and stories—which range from hopeful, moving, and optimistic to defiant, bitter, and heartbreaking—offer a fascinating, unparalleled perspective of the striking diversity and deep nuance of the American experience.

Ian Brown: Ian Brown is an award-winning photographer whose work focuses on the human condition. His portraits have been acclaimed for their simple depth of emotion and honesty. He survived cancer at the age of nineteen, a heart attack at age thirty-two, and being shot at in the middle of a civil war in Colombia while on assignment for Doctors Without Borders. His work has been featured in the New York Times, Washington Post, and a number of international publications. He lives in Toronto and continues to try perfecting making pancakes for his seven-year-old daughter.