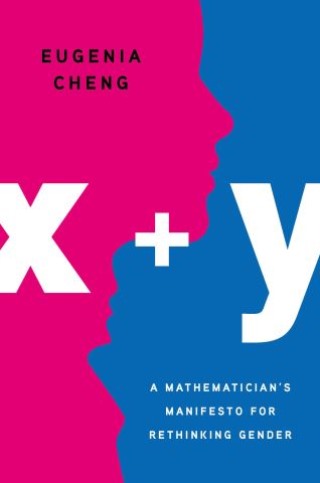 A Mathematician's Manifesto for Rethinking Gender

A brilliant mathematician examines the complexity of gender and society and forges a path out of inequality.
Why are men in charge? After years in the male-dominated field of mathematics and in the female-dominated field of art, Eugenia Cheng has heard the question many times. In x + y, Cheng argues that her mathematical specialty -- category theory -- reveals why. Category theory deals more with context, relationships, and nuanced versions of equality than with intrinsic characteristics. Category theory also emphasizes dimensionality: much as a cube can cast a square or diamond shadow, depending on your perspective, so too do gender politics appear to change with how we examine them. Because society often rewards traits that it associates with males, such as competitiveness, we treat the problems those traits can create as male. But putting competitive women in charge will leave many unjust relationships in place. If we want real change, we need to transform the contexts in which we all exist, and not simply who we think we are.
Praise for Eugenia Cheng
"[Eugenia Cheng's] tone is clear, clever and friendly . . . she is rigorous and insightful. . . . [She is] a lucid and nimble expositor."
--- Alex Bellos, New York Times Book Review

"Dr. Cheng . . . has a knack for brushing aside conventions and edicts, like so many pie crumbs from a cutting board."
--- Natalie Angier, New York Times

Eugenia Cheng: Eugenia Cheng is the scientist in residence at the School of the Art Institute of Chicago and an honorary fellow at the University of Sheffield. She is the author of How to Bake Pi, Beyond Infinity, and The Art of Logic in an Illogical World. She lives in Chicago, Illinois.