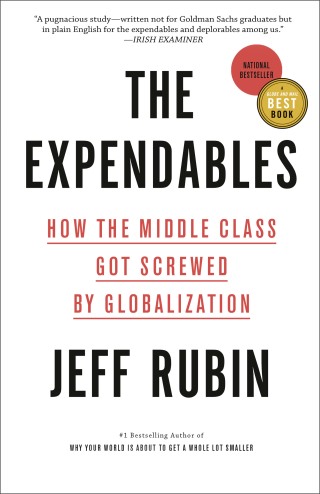 How the Middle Class Got Screwed By Globalization

From the #1 bestselling author of Why Your World Is About to Get A Whole Lot Smaller, a provocative, far-reaching account of how the middle class got stuck with the bill for globalization, and how the blowback--from Brexit to Trump to populist Europe--will change the developed world.

Real wages in North America have not risen since the 1970s. Union membership has collapsed. Full-time employment is beginning to look like a quaint idea from the distant past. If it seems that the middle class is in retreat around the developed world, it is.
Former CIBC World Markets Chief Economist Jeff Rubin argues that all this was foreseeable back when Canada, the United States and Mexico first started talking free trade. Labour argued then that manufacturing jobs would move to Mexico. Free-trade advocates disagreed. Today, Canadian and American factories sit idle. More steel is used to make bottlecaps than cars. Meanwhile, Mexico has become one of the world's biggest automotive exporters. And it's not just NAFTA. Cheap oil, low interest rates, global deregulation and tax policies that benefit the rich all have the same effect: the erosion of the middle class.
Growing global inequality is a problem of our own making, Rubin argues. And solving it won't be easy if we draw on the same ideas about capital and labour, right and left, that led us to this cliff. Articulating a vision that dovetails with the ideas of both Naomi Klein and Donald Trump, The Expendables is an exhilaratingly fresh perspective that is at once humane and irascible, fearless and rigorous, and most importantly, timely. GDP is growing, the stock market is up and unemployment is down, but the surprise of the book is that even the good news is good for only one percent of us.

Jeff Rubin: JEFF RUBIN is a Canadian economist and bestselling author. A world-leading expert on trade and energy, and former chief economist and chief strategist at CIBC World Markets, he recently served as a senior fellow at the Centre for International Governance founded by Jim Balsillie. His first book, Why Your World Is About to Get a Whole Lot Smaller, was an international bestseller, and was favourably reviewed in both Time and Newsweek. The book was the number-one-selling non-fiction book in Canada and won the National Business Book Award, as well as being longlisted for the Financial Times and Goldman Sachs Business Book of the Year Award. Since then, he has written two other bestsellers, The End of Growth and The Carbon Bubble.