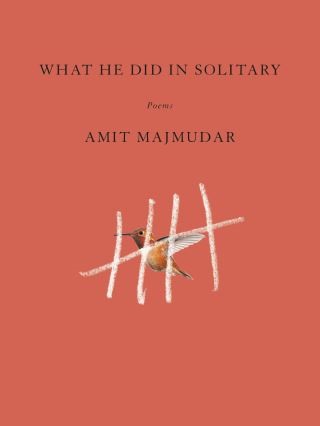 What He Did in Solitary

The prize-winning poet reflects on what sustains us in a sundered world.

With his dazzling ability to set words spinning, Amit Majmudar brings us poems that sharpen both wit and knives as he examines our "life in solitary." Equally engaged with human history and the human heart, Majmudar transfigures identity from a locus of captivity to the open field of his liberation. In pieces that include a stunning central sequence, "Letters to Myself in My Next Incarnation," the poet is both the Huck and Jim of his own adventures. He is unafraid to face human failings: from Oxycontin addiction to Gujarat rioting, he examines--often with dark comedy--the fragility of the soul, the unchartability of pain, and the reasons we sing and grieve and make war. All-American and multitudinously alone, dancing in his confinement, Majmudar is a poet of exuberance and transcendence: "What I love here, / Poems and women mostly, / I know you can't remember," he tells his future self. "But they were worthy of my love."

Amit Majmudar: AMIT MAJMUDAR is a diagnostic nuclear radiologist who lives in Westerville, Ohio, with his wife and three children. His latest works are Dothead, his third poetry collection, and Godsong: A Verse Translation of the Bhagavad-Gita, with Commentary. He is also the editor of the anthology Resistance, Rebellion, Life: 50 Poems Now. Awarded the Donald Justice Prize and the Pushcart Prize, Majmudar's work has appeared in numerous publications, including The New York Times, The New Yorker, Best of the Best American Poetry, and the eleventh edition of The Norton Introduction to Literature. He blogs for the Kenyon Review and is also a critically acclaimed novelist.