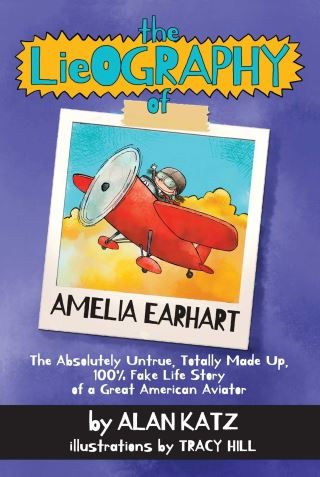 The Lieography of Amelia Earhart

The Absolutely Untrue, Totally Made Up, 100% Fake Life Story of a Great American Aviator

Amelia Earhart, top aviator. You might know that her flight accomplishments were heralded across the globe. But what about the story of her teeth, which were so perfect that her dentist wanted to remove all of them to show his other patients? Or her refusal to read chapter nine in any book? You’re about to be treated to the Lieographical aspects of Amelia Earhart’s life, in this funny, lighthearted, “all that didn’t happen” take on this larger than life woman.

The book ends with a short—but true—account of Amelia’s life—just enough to encourage kids to find out more on this important historical figure. But even if readers have already learned about Amelia, the wacky stories in this tall-tales book will be even more enjoyable.

Alan Katz: Alan Katz has written more than 40 highly acclaimed children’s books, including Take Me Out of the Bathtub and Other Silly Dilly Songs, The Day the Mustache Took Over, OOPS!, Don’t Say That Word!, Really Stupid Stories for Really Smart Kids, and two Awesome Achievers titles. Alan has received many state awards for children’s literature, and he frequently speaks at literacy conferences and schools around the country.