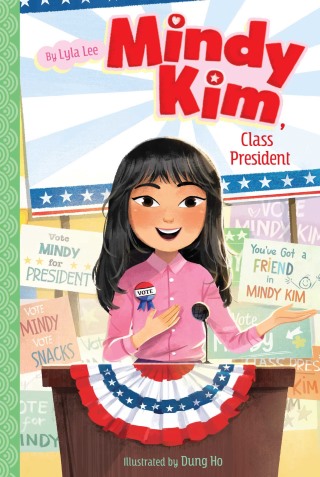 It’s time to pick a class president, and Mindy really wants to win—and she’s basing her entire campaign on snacks and being kind, so how could she NOT be chosen?

But there is one big thing that Mindy is not sure she can do—make a speech to her class about why she would be the best pick for president. Can Mindy face her fears and show the class—and herself—that she can be the best class president ever?

Lyla Lee: Lyla Lee is the author of the Mindy Kim series as well as the upcoming YA novel, I’ll Be the One. Although she was born in a small town in South Korea, she’s since lived in various parts of the United States, including California, Florida, and Texas. Inspired by her English teacher, she started writing her own stories in fourth grade and finished her first novel at the age of fourteen. After working various jobs in Hollywood and studying psychology and cinematic arts at the University of Southern California, she now lives in Dallas, Texas. When she is not writing, she is teaching kids, petting cute dogs, and searching for the perfect bowl of shaved ice. You can visit her online at LylaLeeBooks.com.