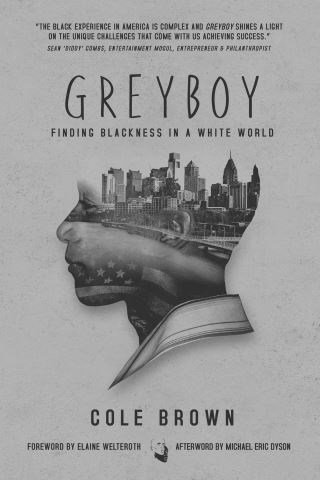 Finding Blackness in a White World

Cole has heard it all before—token, bougie, oreo, Blackish—the things we call the kids like him. Black kids who grow up in white spaces, living at an intersection of race and class that many doubt exists. He needed to get far away from the preppy site of his upbringing before he could make sense of it all. Through a series of personal anecdotes and interviews with his peers, Cole transports us to his adolescence and explores what it’s like to be young and in search of identity. He digs into the places where, in youth, a greyboy’s difference is most acutely felt: parenting, police brutality, Trumpism, depression, and dating, to name a few.

Greyboy: Finding Blackness in a White World asks an important question: What is Blackness? It also provides the answer: Much more than you thought, dammit.

Cole Brown: Cole Brown is a Philly kid; he matured in the city's predominately white private schools and neighborhoods. During his undergraduate years at Georgetown University, Cole began writing his first book, Greyboy: Finding Blackness in a White World. Today, Cole splits his time between Sydney, Australia, and New York.

Elaine Welteroth is a New York Times bestselling author, award-winning journalist, and judge on the new Project Runway. She is known for her groundbreaking work at the helm of Teen Vogue where in 2017 she was appointed the youngest Editor-in-Chief at a Condé Nast publication. Her debut book More Than Enough became an instant bestseller in 2019 and received an NAACP award in 2020.